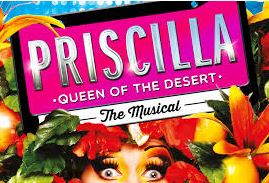 Join fellow VSC members for an enjoyable THEATRE NIGHT.  A special Group price has been secured.

Get ready to shake your groove thing! Australia’s most successful homegrown musical PRISCILLA QUEEN OF THE DESERT is now playing at the Regent Theatre.

The iconic hit musical has more glitter than ever, featuring a dazzling array of more than 500 award-winning costumes, 200 headdresses and a nonstop parade of dance-floor classics including IT’S RAINING MEN, I WILL SURVIVE, I LOVE THE NIGHTLIFE, FINALLY, and many more.

Based on the Oscar-winning film, PRISCILLA is the hilarious adventure of three friends who hop aboard a battered old bus bound for Alice Springs to put on the show of a lifetime. Their epic journey is a heart-warming story of self-discovery, sassiness and acceptance.

After winning a glittering array of international awards on Broadway, the West End, Europe and Asia, Simon Phillips’ spectacular production PRISCILLA returns to Australia for its 10th anniversary celebration tour.